These are the words - or something similar - many parents dread hearing from their teenagers when it comes to facing another day in a traditional brick-and-mortar high school.

Deborah, a mother and Army mental health professional in Kentucky, is one of those moms that heard her son Christopher saying he wasn’t happy in high school and needed an alternative. Homeschooling was suggested to Deborah but wasn’t an option due to her work schedule.

“Christopher was struggling socially and academically. He wanted to give up. The fights and drugs at school were driving him crazy. He’s not the kind of kid that finds it easy to sit back and watch bad things happen, but he had to,” says Deborah about what drove her to seek information about James Madison High School (JMHS) online. 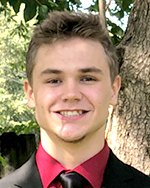 The seventeen-year-old began coursework at JMHS online this summer and, thanks to credits transferred in, expects to finish by December, graduating early. He has his sights set on the Navy. His military career aspirations made seeking a GED not ideal because each branch of the military sets strict limits on how many GED recipients they consider. An online high school diploma was Christopher’s top choice. And seeing Christopher earn an accredited high school diploma was non-negotiable to Deborah.

Deborah’s sister had graduated from JMHS and even took part in the Atlanta graduation ceremony. Knowing that her sister had a good experience and that getting into college after JMHS had been easy made Deborah more at ease with offering Christopher the option of online high school.

7 Reasons Why JMHS Was the Right Choice

When discussing what factors led their family to JMHS, Deborah names the following seven reasons as their family’s top motivators for enrollment:

Deborah notes that Christopher initially felt nervous about using the online format for high school but, with the help of his mom and his aunt, he quickly saw that it was easy. She also points out there were a myriad of ways that James Madison High School made their decision to transfer Christopher there an easy one.

The flexible payment options offered are a prime example. The admissions advisor worked with Deborah on an affordable monthly payment and Christopher will get all the needed credits to graduate by December.

For a family initially unsure if online high school was the right choice, “We could not believe it went so smooth,” says Deborah.

Is online high school right for your teen? Call our admissions specialist at 1-800-349-6861. We’re happy to answer any questions and address your concerns.

Our blog comes to you live from our high school students and community. Dive in to hear more from current students, alumni, and experts as we celebrate our student's accomplishments, persistence, and passions.

Refer to Academic Catalog for financial terms and conditions including interest and annual percentage rates.